Libraries of the Documentary System 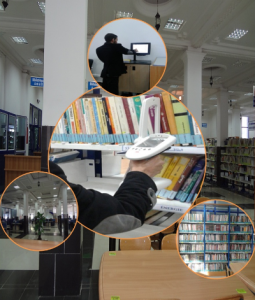 The Central Library of the University (UCL) and the faculty libraries are organized to support their users in their documentary research, whether local or remote (via the Internet); by providing them with a multidisciplinary and multilingual documentary database, developed to cover all the courses provided by the university.
In short, they are a powerful teaching tool that follows the evolution of new information and communication technologies. The documents of the UCL are equipped with RFID tags (Identification Codes), which allow both of the identification, the management of document communication transactions and their security.
The documentary collection is accessible from computerized catalogs, elaborated by type of documents: 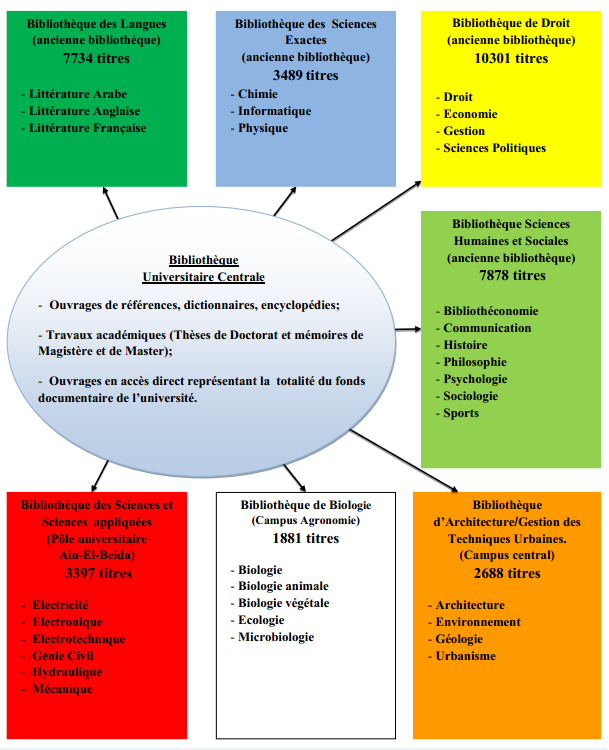 The documentary system of Larbi Ben M’hidi University is based on the central library, a new place of work and research that stands majestically in the university’s new central campus, designed by the Algerian architect M. Chorfi Ahmed, who knew how to snuggle the building against the sides of Sidi R’ghiss Mountain which borders it perfectly marrying its circular shape in harmony with the overall architectural structure of the university, a rather modernized Moorish style.
Its opening (October 2008) preceded by a few months its accession from university center (1983) to the rank of main university (04 January 2009), from which it inherited the documentary fund. Multidisciplinary fund, which from year to year is enriched by counting new sectors (Sports, Political Science, History, etc.). The central library is the core of this organization around which many of the faculty libraries we represent above gravitate:

2. Beghou, Slimane : Responsible for the development of the documentary collection

5. Messaoudi Rochdi: Responsible for the processing and communication of documents

Guided Visit to the UCL

Other visits throughout the year in reply to requests

Annual exhibition with sale of university books from 01 to 05 May 2018; Permanent exhibitions of new acquisitions proposed and presented by themes, Exhibition of the entire collection (nine issues) of the university magazine:

''Journal of New Technology and Materials";

First Algerian scientific journal indexed by "Thomson Reuters", 03-02-2016; Meetings between people of the trade on various topics take place periodically at the U.C.L.